£15 all day with Rosetta Art Centre drawing and lunching in Epping Forest. Contact the West Ham office to book.

or “Anansi by the gumtree.”

or “Do cracks matter?”

A story, a story: Coming soon to make your hair curl. ​

On Gumtree of all platforms was up for sale at nearly half a million (standard) a terraced house in quite poor condition in east London.  That was way back in January. It was seemingly not a popular viewing because as the totally incompetent estate agent declared, “It has tenants”. Lying typically,  he said that there was no problem, waved his hand above his Brylcreemed head and reported, “They’ll be out in three months.”

There were other abodes to view but the lettings lot were out in force snapping up old Victorian terraces for up to zero point seven five of a million pounds. Every Saturday was taken up house-hunting whilst retaining an interest in the tenant-crowded place.

UP FOR SALE went my one bedroomed flat in non-swanky Leyton. Any interest was from young people egged on by their parents and an offer was made before what was a pre- tax  crazy chasing any property period went quiet and steadied. Along came Brexit. Meanwhile the vendor and landlord at my interest was evicting his relations and dreaming of getting to Mecca in the Hadj rush-month. Pilgrimage pending or not, we all realised there was a ploy to get a council house at the end. The councils advise tenants not to go unless evicted. Ir’s the system whereby tenants go into emergency accomodation after the landlord’s had the High Court bailiffs in and following that a council place becomes available. Of course buyers wait patiently and landlords are seen publicly as evil people on whom revenge should be poured.

The buyer for my flat signalled to her agent that she was anxious to move in then seemed to hibernate. I prepared my family, my pregnant belly and my furniture galore to move in with my mother. The tenants in my dream house were not budging. My offer to buy had been accepted but my guts were shaking as the vendor was cagey and his agent, incompetent. House prices were climbing to ridiculous heights. Prospective buyers were bargaining down capitalising on the post-Brexit rumours about falling property prices. The property developers had retreated. I was working long shifts and phoning agents in my breaks. My waters broke, and once maternity leave began (and in my line of work it’s an ungenerous blip) I was very determined to close deals and get nesting.

The vendor was full of promises about tenants’ imminent evictions spelling out all his costs to sell his house to me as though I were about to offer him cash in hand. When that failed he resorted to fighting with his agent and threatening to stop the sale.Then my solicitor went on a fortnight’s holiday and Mr Nasty sacked his own solicitor.I just wanted to get that house. If I lost it, I’d go under the ladder,  under the first rung.

Miss flighty buyer came in from her coma and wanted to move in as soon as possible. The flat was ready, tidied, cleaned and smart. She had her bargain; conservatory, garden, Mirabelle plum harvest an’ all.

I was living amongst two sets of furniture and flogging anything not used for a year on auction sites.

Finally the High Court bailiffs were ready to pounce on the clever tenants.  Each week both the vendor and agent announced that this was the week. Three weeks in and the agent almost said in passing that the bailiffs had given him the time and date. The bailiffs did their job, the tenants were homed in bed and breakfast, and there was no end. The vendor was related to one of the tenants and was allowing her to return in four days to collect her possessions. That was then extended to another three days. My next step was to inspect the property and be satisfied that the tenants were out and that the house was empty and clean. The tenants were out but beds,  fridge freezers, tyres, old duvets and bed bases were yet to go. The vendor said he would do no more cleaning for me but he would remove the fridge freezers. During the next week I drove by spying until I saw for myself a huge van being loaded up with white goods. I cut short a family reunion weekend to meet Mr Despicable to check the state of my future purchase. I was aware that at any time he could renege on our agreement that I was the buyer.I kept sweet for fear of fish under the floorboards.Wiley Anansi was well and truly in da house.

The front garden was full of rubbish. The bins were overflowing.The bailiff’s notice was on the door.

The house was filthy but I kept smiling in public. Indoors I was a wreck and swinging moods crazily,  working, living.  Contracts were exchanged. For a day I was on cloud nine then the vendor phoned wanting cash for he was leaving the country. Big fat alarm bells sounded. Through subdued tears I explained that all monies go to his solicitor. The next day I loaded more trust onto my pretty amazing solicitor and she advised me to worry not and to get the money rolling through Cyberspace. Banks have their time schedules too and checks on possible money-laundering. I could not hasten the bank system so waited out another week.

The completion day came and then it turned out that nothing could go ahead until the vendor settled Court Ordered repayments of loans. Crook was a new word to my increasingly long list of swear words . He had two hours to do all of that. I was palpitating and ready to vomit, unable to release my phone, keeping it close to my lactating breasts.

In the eleventh hour,  the agent called to say I should come for the keys as, a minute ago,  the money had gone through and completion had happened. What keys, for unfortunately the vendor had mislaid the key, his home and car keys in his locked car? My mother actually mouthed an expletive.

The AA was called and an hour later my family, the vendor and the agent were in MY house.  The vendor asked me to help him carry out a freezer he’d left behind. Gob-smacked I was but I did it despite being post-Caesarian and traumatised by what was happening.The estate agent remarked how my baby was unborn when all this started, the vendor looked after a blink like a man who’d found a fridge but lost a freezer, my mother said “Fuck off!” and I fist-punched the air “YES”. The agent whispered, “Change the locks”.

And cracks do matter. They have a reason to be. 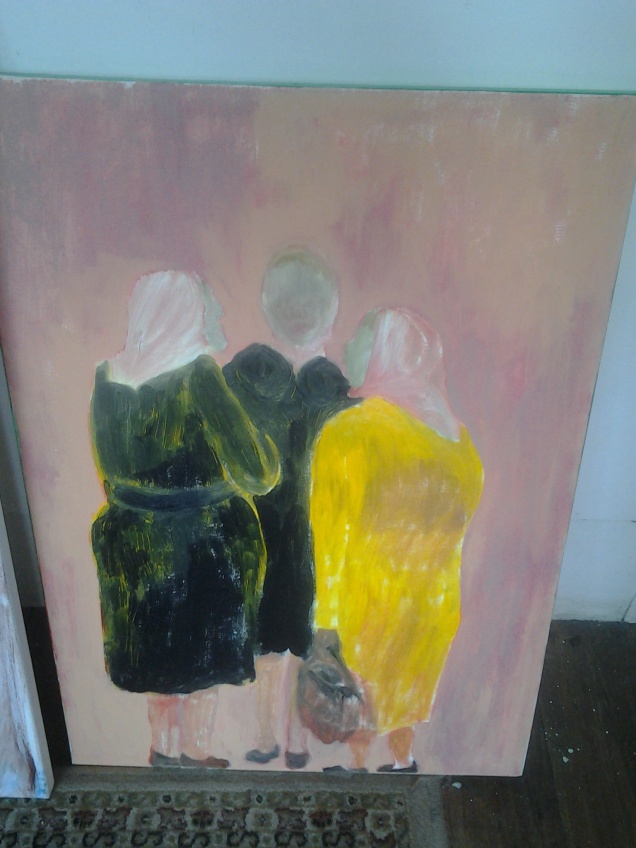 Long ago when Hackney Wick was full of peanuts and never called Fish Island or was simply confused with the name The Isle of Dogs by North Londoners pushing east, Victoria Park was not a landmark, a picnic place,  an interest for a documentary. It was swampy,  unchartered and had deer. Around the perimeter,  grand horse-chestnut trees guarded another era when people slept in on a Sunday and lived in a square of houses destined to be worth millions.

I used to take youngsters in an Austin 1300 with its sunroof and, with no problem,  park by Victoria Park around a back way gate. We’d collect conkers and feed them to the deer. We’d fill up carrier bags and leave the conkers in the grate at home.

One day I chucked out the collection. After a few months the conkers had rooted and sprouted. I put a sapling in each corner of the cultivated garden.

Thirty-two years later, son of a Victoria Park conker tree stands huge and beautiful in a Leyton back yard. Proud? You bet.

​This is in Romford Road where Arnold Schwarzenegar pumped iron.One gutted 1950s gym.

Waltham Forest Council.Hmph. £ signs on their foreheads. Today I went with them urban youngsters blackberry-picking. First of all we checked out the lazing crabs and perky lobsters in Hoo-Hin’s tanks.What a dump is Argall Avenue and that Staffa Road.It all just got worse. Pavements are unkept, cars drivers move without heeding dog-walkers, child-walkers, or pissy weirdos, once decorative shrubs wave aimlessly through bashed railings and poo stays baking in the sun.What a dreary place and I doubt if much brass is in the muck.
Today huge container lorries kept their engines running on double yellows whilst bulked-up on the pavement so we had to cross a glass splintered so called road to negotiate standing vans and uneven paths.All this shit adjacent to Burwell Residential Estate with its pretty rose-gardens, pretty tiled path fronts and a couple of three piece suites. Where is the concern for residents’ quality of life? Where is this industrial village into which riders on the train stopping at Lea Bridge fall clutching hopes of megabucks and expansion of wealth?

The back ways are disgusting.

Now for Essex Road and St James’ Park down the back of The MillE17. What happened? It’s not a park which has been socially cleansed like Lloyd and Coronation and Jubilee.It is a place where you need eyes in the back of your head. The tunnel stinks of yellow dog piss because it is full of yellow dog piss. The backwoods off the bridal path look fit for a Red Riding Hood film set. Doggers park up opposite Barn Croft School or what is that line of parking which prevents the free flow of W19 buses? I arsk yer.

There’s Essex Road Garage marking up the gutters with black oil and a limousine. From the park, scented rose bushes have been abandoned and left to spread all over the place. What happened? Unguarded kiddies swing high and crazy in what may be a prize-winning play area not bothered about child-catchers at all.

Some people need to make the area a bit normal. There is nothing E17 about the place.

What do we want? We want it now.