Up Your Street subscribers joined Waltham Forest Local History Network on its first outing, an afternoon out in sunny Brixton to visit the Black Cultural Archives. The planned trip was not a Black History Month event but the coincidence looks good. I wasn’t sure what the trip was for but I wanted to see a million pound building and museum

With open minds we, an ethnically diverse group if ever there were one, attached ourselves to the teenagers and tutors led along by a retired teacher. I knew the Waltham Forest history lot were after finding ways of recording the histories of every cultural group in the borough. Currently the publicized history borough-wide is that of the White British. The network meetings are those of the White British, so I understand, which means very little except a whole heap of assumptions about individual experiences.

Brixton Riots, Swann Report, Multi-Cultural Education, Mary Seacole. In the eighties, the Waltham Forest schools were the movers and shakers when it came to  valuing all members of the community. Library books changed colour and humanities bore the torch for christian love thy neighbour  essays and discussion ideas. The pupils grew up with “Kumbaya” echoing from their Walkmans. The neighbours moved away and other mother tongues filled the bus queues. More people needed a burst of identity to keep the “Rivers Of Blood” at bay and still the meetings could not attract story-tellers  to enhance the next generation’s well-being. The failing was abysmal. We are still doing the same: Thudding out Black History Month, raising up archives, talking about hair and repeating all of 1985 when in reality we are going backwards into our own tents, frowning at FGM, presenting theatre about back in the day, abusing our children, watching our words, and voting in fascists.

Even the force of the riots in 2011 was not the catalyst for the country’s sagging and muddled government to gift a Black Cultural Archive building to its people. Bravo to those people of passion who got in hand pretty fat Heritage Lottery money.

The current and free exhibition is all about women from African blood who inspire people even now, centuries down the line. 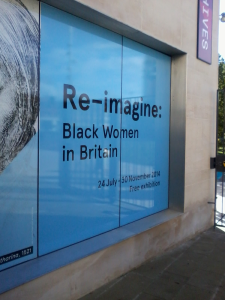 The display area is tiny. Before the founders had their Georgian building the collections were kept in what is now a chicken shop. They are scared of space obviously. Small and cramped but okay for eight people at a time. There’s a café with £1.50 tea.

In the sharp October sun, we,  the unrecognized pearls  from Up Your Street,  sat at the empty picnic table on the flag-stoned courtyard, counted our £1.99 McDonald’s vouchers and ate our Penguins.