What a lovely Sunday morning:  Into the Mill in Coppermill Lane for 11 am,  hung around for the Eventbrite bookers, watched a black cat cross our path then set off with Peter and John leading us into an empty Walthamstow Market. 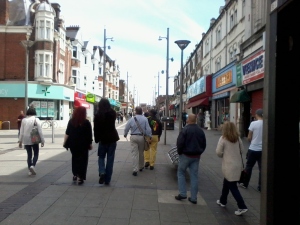 We checked out the Warner mansion and the symbols above dirty pre-loved architecture then listened to the second poem read by a Coppermill poet. 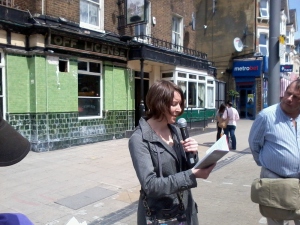 Upwards and onwards to Walthamstow historical landmarks which had seen a better glory.

Outside the Chequers pub Maureen of The Mill read her poem about the watercress seller. Walthamstow Marshes were fertile grounds for the growing of watercress for the London markets. Who was eating the stuff? Waitrose has re-fashioned it since last week. Theirs is from Hampshire so as we urbanites feel impressed.

Further up the market I felt I were in a foreign place as aluminium chairs and tables spilled onto the pavement from Sunday morning hipster coffee shops. The crowds looked  tourists but hey, this is Walthamstow and we are a changing multi-ethnic population. We have been since the 1970s (and before on a smaller scale)  such that now ‘ethnic minority’ could refer to indigenous white British residents. I digress. Isn’t the spelling of “licence” as in “Off-Licence” wrong on the Chequers pub? 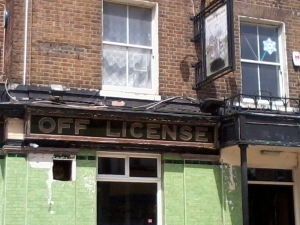 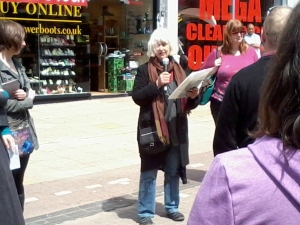 Mo in her Paisley pashmina reading her poem about sexy water-melons as seen in Ridley Road Market on the Turkish stalls.

Some of the poems from John were about his kith and kin as known down the Market of yore and others about visitors to the Market. Some were about street markets internationally. One poem was about Churchill’s unwanted motorised visit to the High Street in 1926. It was at the time of the General Strike.

Back to today, there was the usual slagging off about supermarkets taking over and dwellings replacing picture-houses. 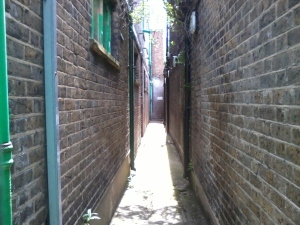 At the end of the well-paced walk in the sun it was refreshing to stand under the slim green- leafed trees in the Market Square and hear Peter tell us about the old public baths provided by municipalities for the great unwashed, and Passmore’s generosity in providing books for the masses. 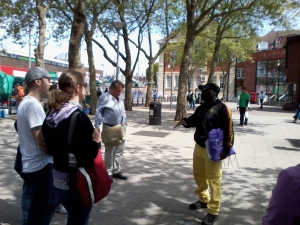 John read a finale poem in the vernacular of the working street traders who are no more. 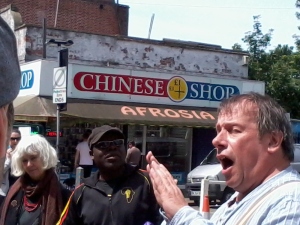 The Walthamstow Central Library was behind us and that’s from where the refreshments beckoned us.

Fantastic combination of local history with a touch of the history of people from the Caribbean too and the market-inspired poetry from a local poetry lovers’ group: Fact and fiction.